Autonomous Cars: A Discussion On The Future of Automobiles

For decades, self-driving cars were only a thing out of sci-fi novels, movies, and cartoons. Today, as we quickly approach the year 2020, roadways filled with autonomous cars is becoming more of a reality.
While it’s an exciting time to be alive and witness a major advance in the automotive world, many of us may have a hard time wrapping our minds around the idea of highways filled with driverless cars.
Automakers are confident that self-driving cars will help decrease the number of annual accidents since most accidents are human error but there are other things to consider.
This infographic takes a closer look at some important concerns that you may not have considered, that are related to autonomous vehicles.

Can Self-Driving Cars Be Moral?

Virtually every move you make on the road could lead you to make the decision to sacrifice yourself or your passengers or to put other motorists or pedestrians lives at risk. The decision you make is based on your “moral compass,” but what would a self-driving car do?
A study from Science Magazine revealed that participants, who support self-driving cars, would not want to ride in an autonomous vehicle that would self-sacrifice nor would they approve of regulations that would mandate self-sacrificing.

Will The Moral Decisions of Self-Driving Cars Be Legislated?

Currently, the driving laws are cut and dry, and the expectations of drivers are clear but how will self-driving cars be regulated? Although they are designed to be safer than the standard vehicle, there’s no guarantee that incidents wouldn’t occur. So, who’s to blame?
In the same study in Science Magazine, one researcher pointed out that if a manufacturer offered different “moral algorithms,” would buyers be responsible for any wrong doing?
Safety should remain the top concern of legislators and car buyers.

The “brain” of a self-driving car has to be smarter than the average driver, but it also needs to be “street smart” and have the ability to think fast and defensively. Many skeptics and supporters, alike, wonder how much control should be given up to a self-driving car, especially when standard vehicles remain on the road.

Can Hackers Take Over?

Hackers have the ability to intervene with standard automobiles, so is there any way to keep hackers out of our self-driving cars? Since autonomous vehicles rely on constant connectivity and flawless safety features, the security would need to be impossible to hack. If hackers took over, could you, as a driver, take over?

Up until this point, autonomous vehicles have “learned” how to operate on nearly perfect roads and aren’t programmed to handle any kind of road situation. In fact, they rely on clear lane stripes and other standard markers. To run at optimum safety, autonomous cars would need to anticipate each pothole and crack on our roadways. 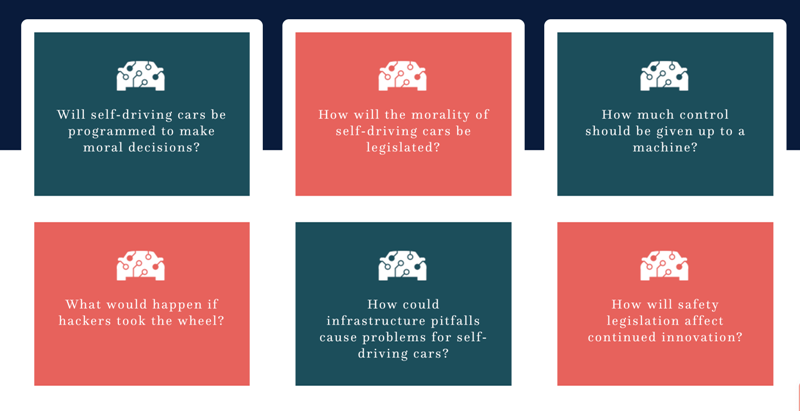 Generally, people understand tire pressure as the amount of air that fills up a vehicle’s …