Printing has a long, complicated, and interesting history stretching back 5,000 years and spanning the globe from ancient Egypt, to China and to Europe. The invention of printing spurred massive changes in all aspects of human development especially in science, literature, politics, and religion.
In this infographic, Inkjets  highlights the important milestones in printing’s complex history and identifies how they impacted human history. For instance, it was in circa 3000 BC that the ancient Egyptians first used papyrus, a thick paper-like material made from a plant, as a surface for writing religious and literary texts. But it was in 105CE China where movable type printing technology was invented and led to the flourishing of that civilization through literacy. European missionaries brought the technology to Europe and in turn, caused enormous influence in Western culture. And as they say, the rest is history.
Join Inkjets as it explores the fascinating milestones in the story of printing. 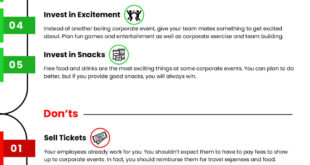 How to Run a Successful Corporate Event

Planning for your own corporate event? Need an inspiration? If so, you are in the …