Tips for Introducing Dogs and Cats Living in the Same House

Are you the proud owner of a dog or cat? Are you thinking about bringing a member of the opposite species into your home? If so, there are a few important details that you will need to be aware of. Here are some very handy tips that you can make use of in order to help dogs and cats live together in your home.
Make Sure That You Respect Their Personalities
It isn’t impossible for a dog and cat to live together in your home. However, it may take a bit of work. Your dog and cat will have to get used to each other. This will usually happen sooner or later on its own but there are things you can do to speed up the process.
Dogs and cats very naturally have different kinds of personalities. Dogs are social animals who are defined by the pack system. A number of them live and hunt together with one of them being the clear leader. This will still be true even if you have several domestic dogs living together in your home.
Even if you have up to now only had a single dog in your home, or if they were the only animal in your home, this behavior is rooted deep in their DNA. It will assert itself as soon as you bring another animal into your house, even if it is a cat. Your dog may try to immediately establish themselves as the dominant animal.
Cats, on the other hand, are much more solitary. They tend to be very territorial and will prefer to have plenty of safe space to retreat to. Even when they are feeling perfectly secure, they will still want some time to themselves. This will be magnified during the time that you are trying to get them acquainted with a new dog.
Introduce Them Slowly But Give Them Space 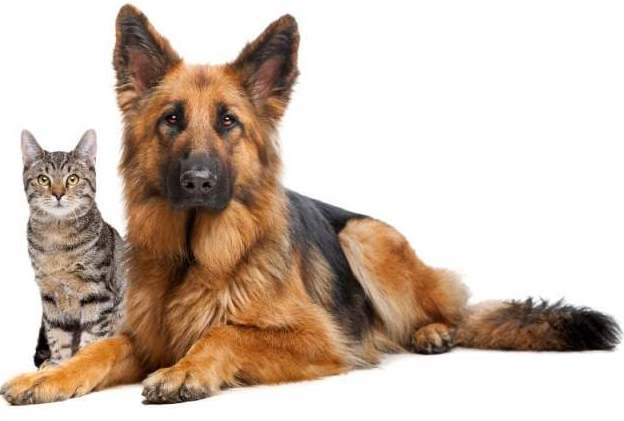 Your best bet will to handle the intro process very gingerly. If the cat is the one you have had and the dog is new, don’t hold the cat in your arms while you introduce it to the dog. You don’t want to get bitten or scratched up by a panicky cat if the intro goes bad. Also, trim their nails beforehand so they won’t scratch up the dog.
Your first order of business should be to make sure that both animals have plenty of space to retreat to if they need to. This way, they won’t be in each other’s way and at each other’s throats. For a cat, you can make sure that they have access to a full-sized cat scratcher lounge so that they won’t have to come too near the dog.
Meanwhile, for your dog, you can make sure that they have a carrying case or kennel on hand. This will give them a safe place to retreat to if they are scared of the cat or their new environment. Make sure that there is food and water in the kennel, along with plenty of newspaper if they haven’t yet been fully potty-trained.
Now that you have their spaces prepared, it’s time to introduce them. It’s a good idea to keep them both on a lead so that they can’t get close enough to hurt each other if the intro goes wrong. Let them slowly approach and sniff each other. Getting to know each other’s scent will be a vital part of becoming familiar.
If they seem to be getting along, you can let them off the leash for a bit. Let them slowly become familiar with each other’s appearance and behavior. Make sure to reward good behavior with plenty of treats for both. This will be the strongest incentive for them to continuing interacting with each other in a peaceful manner.
It’s Time to Make Some Animal Friends
Following these handy tips will let your cat and dog make the best possible intro. It may still take some time for them to get used to each other. Whether or not they ever become the best of pals is up to a lot of individual factors. But you will have the basis of a relationship where they learn to coexist in peace with one another.