In 2014, Americans spent a total of $374 billion in prescriptions – up 13% since 2013.
This isn’t the result of widespread, debilitating health problems affecting Americans across the country. Instead, the push to take prescription drugs is due to the influence of the most powerful pharmaceutical companies in the U.S.
From August 2013 to December 2014, these companies spent $3.49 billion in disclosed payments to doctors, teaching hospitals and other companies.
TheLawFirm created the below infographic using data from a recent ProPublica report to highlight the ways in which “big pharma” is impacting the health of Americans.
One of the most unsettling findings for many people might be that the two highest earning doctors practice family medicine and pediatric critical care – likely tied with the average four yearly prescriptions for U.S. children. The highest earning doctor is Dr. Sujata Narayan, practitioner of family medicine, earning $43.9 million from pharmaceutical companies.
As well, common household names like Johnson & Johnson are spending double on marketing than what they are on research and development, with a total of $17.5 billion on marketing compared to just $8.2 billion on research and development.
In order to resolve this culture of prescribing as a first solution, TheLawFirm.com suggests using the “conservative prescribing” method outlined by Dr. Gordon Schiff. This approach recommends preventative methods and lifestyle changes as opposed to prescription drugs. As well, this approach recommends doctors be strategic when prescribing drugs.
Informing the public, through initiatives like the below infographic, can help to prevent the influence of big pharma on the health of Americans.
Read the below infographic to learn more about where big pharma is funneling their money, which doctors are earning the highest profits, and how this has affected the health and finances of Americans. 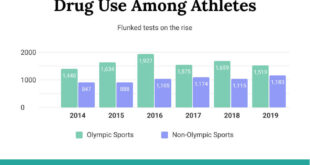 Competition in sports can be fierce, and some athletes resort to banned methods in order …