The content management system that everybody knows is WordPress. WordPress was first launched in 2003 and has since become the leading blog software globally. In 2016 it was recorded that WordPress is used by 59.3% of websites with a known content management system (CMS). the number of website that use WordPress has exceeded 17 million and the latest version of the popular CMS WordPress 4.6 has been downloaded 3.8 million times since it was released in August 2016.
The features that WordPress currently offers are over 46,290 plugins and 4,081 themes. The varied options offered by WordPress alongside a simple to navigate interface supports the rapid increase in popularity of the platform. This is supported by content within the infographic below that notes that, WordPress is the leading content management system choice among website owners. Each month there are approximately 69.8 million new posts are written in WordPress and users write 542 million words in WordPress blogs daily. In July 2016, there were 22.2 billion page views across different WordPress blogs, which is 2.4 billion more compared to July 2015.
There are many high-profiled celebrities that are using WordPress as the main content managment system for their official websites. These celebrities include rapper and business mogul Jay-Z, English comedian Russell Brand, Sir Tom Jones, retired NBA star Kobe Bryant and action star Sylvester Stallone. Celebrities are not the only one’s making the most of WordPress. WordPress is also used by several of the world’s most popular mass media websites including Forbes, The wall street Journal, Reuters, the New York Times and Harvard Business Review. There are also significant global brands using WordPress as their first choice of CMS for their websites these brands include, Coca-Cola, Samsung and Mercedes-Benz.
To find out more about the world’s number one content management system, take a look at this eye-catching infographic containing 28 lesser-known facts about WordPress. 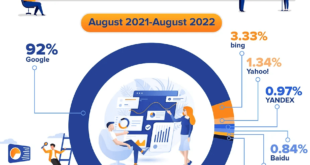