of emigration. The most popular destinations are the Western countries: the United Kingdom (63%), Ireland (12%), Germany (7%). In recent years, there appeared Spain (3%), the Netherlands (3%), France (2%), Norway (2%) and Italy (2%). Interestingly, there was a significant decrease in the number of animal transportation orders to sunny Spain. In the years 2013-2015, the interest in this category dropped by as much as 30%.

Dogs are the most frequently transported animals. As regards the most popular breeds that are transported by Polish people, there are six of them: york (12%), Labrador (10%), shih-tzu (7%), German shepherd (4%), miniature pinscher (4%) and Maltese (4%).

SAVE and Share this INFOGRAPHIC
User Rating: Be the first one ! 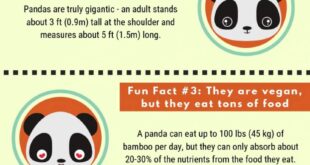 This infographic aims to explore different fun facts of the super cute giant panda. It …