How to Get Baby Sleep in Crib Infographic

A crib is an important piece of hardware for a family. Not only does it etch the concept of independence in a child’s mind, but it also enables parents to sleep with in peace, knowing that their child is safe, secure, and sleeping comfortably in a soothing environment.
However, getting your baby to sleep in a crib is easier said than done. Infants all over the world have simply refused to be put to bed in a crib. Parents from across the globe have reported that their kids start bawling as soon as they lay them down in a crib.
The unceasing cries of their children have forced many parents to abandon using cribs. These parents have then had to accommodate their babies with them in their beds. While it may seem harmless at first, there are many reasons this should be avoided.
Letting your kid rely on you too much can have an adverse impact on them in the long run. Consequently, parents must make their children feel at home in the crib and should transition them from their arms to their cribs as soon as possible.
There are many reasons a child refuses to be put to bed in a crib. One such reason is that the crib feels completely alien to them. Not only is the crib new and unfamiliar for them, but they also have nothing that feels homely.
You can make your baby sleep in a crib by singing them to sleep. Not only does a lullaby have a soothing effect on your child, but it also makes them fall asleep quickly. Once they have fallen asleep, you can always carry them to their cribs and put them there.
It can be very difficult for you to change your child’s sleeping pattern after they are older than six months. Parents who delay their kid’s transition from sleeping in their arms to sleeping in a crib are, thus, informed that they have a short window in which they must operate and make their children acquainted with a crib.
To help parents out with this tedious task, we have posted an infographic below of the things that you can do to make sure your child doesn’t cry when you put them in a crib.

Tags Baby Crib Get how to Sleep 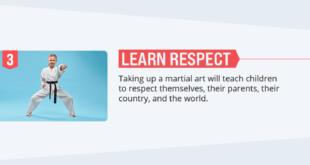 What Are the Benefits of Martial Arts for Kids?

There are multiple benefits adults and children gain by practising martial arts. Aside from being …